Sharing Stories of Success: From The Winnipeg Poverty Reduction Council - A Focus on Youth Employment

The Council, which meets regularly throughout the year, was established by United Way of Winnipeg in 2007 based on a collective desire to address the underlying causes of poverty and the thinking that no one sector alone can successfully address the complexities of poverty reduction. Council members came together committed to working collectively to engage the community, deepen their understanding of the issues, and pursue opportunities for innovative solutions and systems change.

From the outset the Council described its mandate as to:

Over the years the WPRC has worked to establish and sustain a membership that is inclusive and representative of our community.

Identifying Priorities: From A Plan to End Homelessness, to A Focus on Youth Employment

One of the first tasks of the Council was to engage the community in developing a comprehensive Framework for Action that would serve to guide their work.  Based on the eight aspirations in that Framework, early WPRC priorities included collaborative initiatives focused on early childhood development, asset building, education and affordable access to sports & cultural opportunities.  In 2012, the Council’s work became focused on innovative approaches to addressing homelessness. A multi-sectoral Task Force was established to look at the aspiration of having a home. This work culminated in the 2014 Plan to End Homelessness in Winnipeg – a comprehensive strategy aimed at ending homelessness in our city. The plan called for the creation of a new organization, End Homelessness Winnipeg, whose task it would be to implement the ten-year plan. End Homelessness Winnipeg (EHW) was established in 2015 and is now working to coordinate, measure and report on homelessness efforts in Winnipeg. 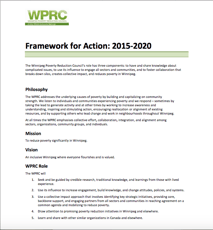 Following the launch of the new homelessness organization, WPRC took the opportunity to review and update the Council’s Framework for Action initially developed in 2008.  This strategic document was updated for 2015-2020 and now includes ten ‘aspirations for Winnipeg’ including independence through income, having a home, feeding ourselves well, learning for life and starting strong.

An analysis of the aspirations to determine where the Council’s greatest opportunity for impact might be led to the choice of ‘achieving independence through income’ as the next priority area of focus.

With income being such a broad aspiration, the next step was to consult widely in the community about where, within the income aspiration, the WPRC could play a meaningful role. With the support of WPRC’s backbone staff support team, the Council also did an extensive review of the literature and demographic data. The outcome was a recommended focus on ‘Youth Employment – with an Indigenous Lens’.

The demographic data in particular pointed to the urgency of this issue, considering that Winnipeg’s Indigenous community is very young and growing rapidly, and that this same population group has, by far, the highest unemployment and lowest income rates.

Adding weight to the importance of this issue is the Truth and Reconciliation Commission report and the Calls to Action released in 2015. Call to Action #92 is directly applicable to the focus on Indigenous youth employment, calling for Aboriginal peoples to have equitable access to jobs and training, and for management and staff to receive education about the history of Aboriginal people and skills-based training in intercultural competency, conflict resolution, human rights, and anti-racism.

The decision to focus on youth employment was made in January 2016. Since then, WPRC staff have been engaging with individuals and organizations in the community who are stakeholders in this issue, to learn about what is already happening and where gaps might be that WPRC could help address.

Thus far, some of the key findings are that:

The unique asset that the WPRC brings to this issue is the involvement of major business groups in Winnipeg, including the Winnipeg Chamber of Commerce and the Business Council of Manitoba. Both have members who recognize the urgency of increasing opportunities for Indigenous employment in Winnipeg, and have a desire to be part of a collective solution.

It is not uncommon in a Collective Impact approach to experience tension between talk and action. Liz Weaver from Tamarack describes this as a healthy tension which reminds us of the importance of both talking and acting. At WPRC we ask ourselves how much planning is enough in order to move forward, whether we have talked to all the important stakeholders, and at what point we are best positioned to move toward action.

Taking all of that into account, a plan of action – which WPRC is tentatively calling ‘TRC #92: Youth Employment ’ after the Truth and Reconciliation Call to Action – is being developed, which speaks to employment and training.  The Council is currently testing the plan by sharing it with community stakeholders.

Once the Action Plan is finalized it will be available on the WPRC web site – which will be online with a brand new look and additional content at the end of October 2016.  We look forward to updating our VCC colleagues on our progress in the months ahead, and welcome any comments or questions.