This edition of Engage! is about celebration. We are excited to announce the launch of our new practice area Community Climate Transitions. Last month, we held our biggest online event ever at Tamarack. We wanted to celebrate by sharing the highlights from Communities Ending Poverty and Communities Building Youth Futures.

The banner image was developed by a graphic recording artist Assma Basalamah. Each recording highlights the key themes and ideas from our events from May 5-7th. Learn more

Our hearts are heavy with the news this past weekend from Chief Rosanne Casimir of the Tk'emlups te Secwépemc First Nation who has shared that 215 Indigenous children were discovered at the site of Kamloops Indian Residential School in British Columbia.

As settlers of Turtle Island, we have a responsibility to advocate, learn, and actively work towards reconciliation. At Tamarack, we recognize the deep, unimaginable, traumatic impact that residential schools had and continue to have on Indigenous children and families. We are committed to working alongside Indigenous communities and partners towards healing together and as a society.

For those of us who are settlers, we are called to actively consider the following:

Community Climate Transitions is a collective impact movement aimed at supporting a just and equitable climate transition, aligned with the Sustainable Development Goals. We are building a network of communities that are committed to tackling climate change through a multi-solving approach that advances social, environmental and economic goals simultaneously. We'll be supporting communities to localize the Sustainable Development Goals and take a holistic view to improve health and social outcomes, building resilience, promoting justice and equity, reducing their carbon footprint, and strengthening economic vitality. We'll be doing this by hosting communities of practice, webinars, and events, producing publications that share our learnings, and supporting our members with specialized coaching.

You can also reach out to Laura Schnurr, Director of Climate Transitions, to learn more. Sign up for our free bi-monthly newsletter to get the latest news and resources. 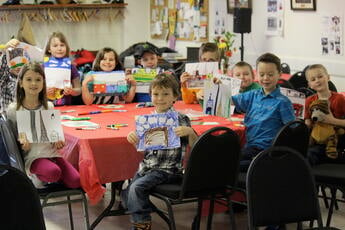 Access to affordable and quality childcare is an important poverty reduction and prevention strategy, as it supports children’s social, behavioural and cognitive skills, readiness for and transition to school, and lifelong physical and emotional health. It supports parents and caregivers to increase their income, opens doors to employment and training, builds resiliency, and reduces chronic stress. However, childcare across Canada is almost universally unaffordable, and the cost burden of childcare is especially heavy for low-income families.

In 1997, to support women’s labour force participation and the number of hours worked, the Quebec government launched Canada’s first universal, publicly funded childcare system that made licensed care extremely affordable. Their $5 per day childcare policy (still affordable in 2021 at $8.50) was made available to families of all income levels and across all employment statuses. Social assistance recipients received free access, and rates for low-income families were subsidized by $3.

At the heart of Quebec’s new system were early childhood centres called Centres de la Petite Enfance (CPE) – directly funded served, regulated, high quality, and well-managed facilities that have been recognized as the ‘crown jewels’ of Quebec’s transformed system. Between 1997 and 2007, the low-income rate for single-parent families headed by women fell from 60.3% to 20.4%. Between 1997 and 2008, the contributions of the nearly 70,000 additional mothers who were back at work than would have in the absence of the program, increased Quebec’s GDP by $5.1 billion (by 1.7%). The return on CPEs grew to significantly exceed their cost, as they generated $1.75 in returns for every $1 invested.  As of 2020, only 27.2% (vs 48.3% across Canada) of parents reporting difficulty in finding childcare cited affordability as a barrier.

This pathway to ending poverty requires dramatically cutting the cost of childcare through the provision of direct subsidies, the creation of new early childhood facilities that offer training to staff, and the delivery of regulated, high-quality childcare services. Childcare supports must be embedded into a broader range of income supports for families, including generous, flexible, and inclusive parental leave policies and insurance plans, and full-time kindergarten.

For this pathway to be successful, childcare centres, including non-for-profit, home-based care must integrate the same standards of quality as regulated care, and systems should be put in place to monitor and enforce them. Training for site operators and childcare providers should be comprehensive and effective across all site-types, and centres should offer the flexibility of operating hours, for example, to account for parents that work shiftwork, and should employ childcare workers into secure jobs that offer decent wages and that include benefits. Children are our future leaders, parents, and consumers. While early childhood development is a complex realm that requires a comprehensive approach, childcare forms a strategic piece of its public policy puzzle.

In September 2020’s speech from the throne, the Government of Canada recognized that they would draw on Quebec’s model to develop “a significant, long-term, sustained investment to create a Canada-wide early learning and childcare system.” Now is the time for us to learn from Quebec’s experience, and to work together to implement this effective pathway to ending poverty through an affordable, accessible and quality childcare system.

10 Stories of Community Innovation for Youth 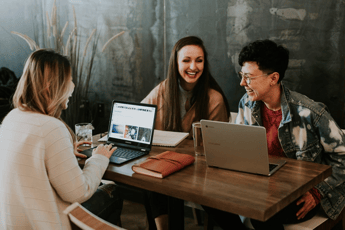 In June 2020, Tamarack Institute launched the Community Innovation Fund: an annual opportunity for Communities Building Youth Futures to prototype a new program, product, service, or system to improve education, employment, and/or training opportunities and outcomes for local youth across Canada. We were thrilled to announce six projects who received the first round of funding, and eight projects that received the second round of funding.

Over the past year, fund recipients implemented community innovation pilots and documented their learnings, including successes, challenges, impact on youth, and barriers that youth experienced over the course of the project.

Here are three case studies from the first round of funded projects from Manitoba, Saskatchewan, and Northwest Territories that demonstrate how communities are adapting to COVID changes and meeting urgent youth needs.

Roving Campus was created by three local teachers with support from the Portage la Prairie School Division. Roving Campus operates five days a week. Three days are dedicated to the teaching of essential outcomes and certifications. Two days are reserved for planning, coaching, and one-on-one instruction.

The digital divide has had a significant impact on youths’ ability to participate and succeed in school, connect with their peers, and access opportunities and supports. Learn how CBYF Prince Albert’s project connected youth with technology using a youth engagement approach.


Due to the pandemic, youth in Yellowknife had limited educational support options and the need for additional employment support for them was heightened. Learn how Yellowknife supported youth through mentorship and technology.

Tamarack is also pleased to partner with Canadian Council for Youth Prosperity, Mentor Canada, NPower Canada, Opportunity For All Youth, and Pathways to Education to bring a series of essays that spotlight how the digital divide has affected youth across Canada.

Youth-focused organizations show us how mentoring, improved access to digital skills training and employment, and youth voice in designing solutions are all best practices when bridging the digital divide for youth living in low-income communities.

Stay tuned! We will continue to showcase innovative approaches from communities throughout the year.

Highlights from our large virtual gatherings

The End of Poverty Virtual Gathering 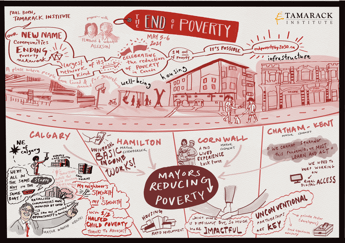 The End of Poverty, brought together over 1,000 learners to explore 14 proven pathways for ending poverty in Canada. The event featured an inspiring keynote from Mayor Naheed Nenshi, impactful ending poverty recommendations from experts with lived/living experience, and an engaging panel of Mayors that have been championing poverty reduction in Chatham Kent, Cornwall, and Hamilton. Top takeaways from the day included the need to create equitable opportunities for people living on low-incomes – particularly for newcomers and racialized groups, the importance of embedding wellness and resiliency into poverty reduction plans, a reminder of the critical role that each sector must play, and that systems need to be changed to work FOR people. Tamarack also introduced a name change for the network – from Cities Reducing Poverty to Communities Ending Poverty. As we move onto the next chapter in our collective work, we look forward to carrying forward the momentum from this event with you!

On May 6 & 7, the 2nd Communities Building Youth Futures Annual Gathering brought together 389 participants (including 85 youth) across North America.

On Day 1, the plenary panel discussed important considerations when thinking about what prosperity means for youth. On Day 2, the youth panel explored youth resilience and the impact of COVID on youth. See the attached graphics for an overview of the highlights from the keynotes and the panel discussions.

Important themes that permeated throughout this year’s events were:

For your viewing pleasure:

Collaborative leadership and governance are about bringing the right people together, supporting them with good tools and practices, and engaging them to work collectively toward community outcomes.

Join Liz Weaver for a new virtual workshop designed to equip you to embed collaboration within your leadership and governance practices. 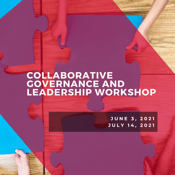 Join Tamarack's Lisa Attygalle, Director of Community Engagement to build a foundation of knowledge and practice for your community engagement work.

Through video lessons, case studies, readings, and activities, you'll dig into the role of community, who should be engaged, community engagement techniques, how to overcome challenges, and how to evaluate your engagement activities.

This course is available to use at your own pace, but you'll be learning alongside a diverse group of over 300 Tamarack Institute learners, and have the opportunity to join Lisa for monthly small group coaching to get more personalized feedback and insight. 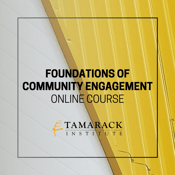 Registration for our free community building webinars includes a recording of the live session, a copy of the slides, and a collection of links and resources.

The Power of Place

What Would it Take to End Food Insecurity?

Crisis Communication In A COVID World: How to Prepare for and Communicate Through a Crisis

Designing for What's Next

We invite you to read our 2020 Annual report and our 2030 Strategic Plan which reflects on Tamarack’s journey through 2020 and our growth along the way. We are incredibly thankful to the 35,000+ learning partners in over 2,300 cities across Canada and beyond for being a part of this journey with us over the past year.